TEHRAN (defapress)- Several people were wounded by a massive blast in the Swedish capital on Wednesday night. Also, several buildings have been damaged in Vallingby including a hotel by the explosion.
News ID: 76446 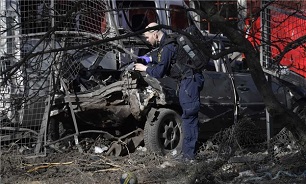 Andersson also said that several people had been admitted to a hospital with minor wounds, adding that one of the victims had been injured by glass shards following the explosion.

Police have temporarily blocked off the area and started a preliminary investigation into the cause of the incident, however, at the moment there is no official information about the issue. Forensic scientists and bomb experts have been working at the scene to try and determine the cause.

It is the second large blast to rock the Swedish capital this month. Previously, a bus exploded in the centre of Stockholm in the Klaratunneln tunnel and swiftly caught fire. The driver, however, managed to escape the vehicle with only minor injuries.