US Decision on Iran's Oil Exports May Destroy Nuclear Deal

TEHRAN (defapress)- The European Union regrets the United States' decision to halt waivers on sanctions against importers of Iranian oil, which may undermine the success of the nuclear deal, known as the Joint Comprehensive Plan of Action (JCPOA), Spokesperson for EU Foreign Affairs and Security Policy Maja Kocijancic said on Tuesday.
News ID: 77003 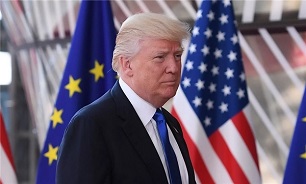 "We regret yesterday's announcement by the US not to renew all waivers. This further risks undermining the implementation of the Joint Comprehensive Plan of Action… . We, as the European Union, will continue to abide by the JCPOA as long as Iran continues the full and effective implementation of its nuclear-related commitments," Kocijancic told reporters.

Iran has warned Europeans, as the main beneficiaries of the agreement with the Islamic republic, that the nuclear deal between Tehran and the world powers will be in danger if European countries fail to fulfill their pledge to ease the US pressures and allow the Islamic Republic to reap the economic benefits of the deal.

The EU, for months, promised to create a special payment mechanism, known as Special Vehicle Purpose (SPV), in order to facilitate business with Tehran in the face of the US sanctions. The process took too long and sparked Iran’s protest.

Although, the long-awaited non-dollar payment mechanism, known as the INSTEX (the Instrument for Supporting Trade Exchanges), was finaly launched as an SPV mechanism, Iranian leaders have lashed out at the European trio of France, the UK, and Germany for insufficient efforts to preserve the 2015 agreement, describing financial channel of the troika as a bitter joke.

On Monday, the White House announced that the United States will end Iran sanction waivers. According to a statement from the Office of the Press Secretary, President Donald Trump “has decided not to reissue Significant Reduction Exceptions (SREs) when they expire in early May”.

Countries that do not stop buying oil from Tehran after the deadline risk facing Washington  sanctions as the decision “is intended to bring Iran’s oil exports to zero”.

"Iran considers the whole US illegal sanctions and their waivers as worthless and meaningless," Moussavi said, adding that given the negative impact of the US sanctions, which are likely to increase after the waivers are not extended, Iran is in contact with the related apparatus inside the country and has had intensive consultations with foreign partners, including the European countries as well as international and neighboring partners on that issue.

The United States left a multi-lateral nuclear agreement with Iran last May. Afterwards, Washington re-imposed the sanctions that had been lifted under the accord.

Last November, the US enforced sanctions targeting the Islamic Republic’s energy sector, however, to ensure low oil prices and avoid disruption to the global oil market, the US authorities granted temporary import waivers to China, India, Greece, Italy, Taiwan, Japan, Turkey and South Korea. Greece, Italy and Taiwan have reportedly slashed their oil imports from Iran to zero, while China, India, Japan, South Korea and Turkey took advantage of the waivers during the first six-month window that started in November 2018.

Washington has claimed that the US, Saudi Arabia and the United Arab Emirates would take action "to assure that global demand is met as all Iranian oil is removed from the market", while market analysts express deep doubt if the trio could make up for a loss of Iran's market share.

In early October 2018, Saudi Crown Prince Mohammad bin Salman (MbS) told Bloomberg in an interview that his country had met its promise to the United States to make up for Iranian oil supplies lost through US sanctions re-imposed after Washington's withdrawal from a 2015 nuclear deal between Tehran and the P5+1 group of countries.

But, Iran's Oil Minister Bijan Zangeneh dismissed the rhetoric by MbS about Riyadh's capability to replace sanctions-hit Iranian oil, saying that the global market will never believe such claims.

"It seems that such remarks [by Saudi crown prince] have been made under [US President Donald] Trump's pressure," Zangeneh stressed.

Weeks later, the Saudi energy minister declared that his country would not be able to compensate for possible oil disappearance from global markets once the US re-imposes its sanctions against Iran.

Speaking in an interview with Russian news agency TASS, Khalid al-Falih said Saudi Arabia would have to use its oil reserves if it wanted to cover 3 million barrels per day of oil loss from Iran.

However, he added, there is no guarantee that oil prices would not go higher once anti-Iran sanctions come into force in early November.

Iran had blamed Trump for oil price hikes, but the US president has pointed the finger at OPEC and called on the oil-producing body to boost output.

In early July 2018, Iran's Governor at the Organization of Petroleum Exporting Countries Hossein Kazzempour Ardebili warned that Trump's rhetoric against the Islamic Republic will force crude oil prices to considerably increase, even to $100 per barrel.

He also emphasized that the US president was wrong to believe that Saudi Arabia and Russia would help reduce oil prices, adding that both key global producers had little vested interest in bringing down the prices.

Kazzempour Ardebili had earlier said that Trump's pressure on international firms not to buy Iranian oil would drive prices higher and end up hurting the American economy, adding that oil should not be used as a weapon or to make political gains.