TEHRAN (defapress)- Iranian President Hassan Rouhani stressed the need for the regional states to increase cooperation in the cyberspace to confront unilateralism in the world.
News ID: 78097 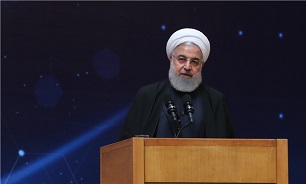 President Rouhani made the remarks at the opening ceremony of the 25th Iran International Exhibition of Electronic, Computer and E-Commerce (ELECOMP 2019) in Tehran on Wednesday.

"Today we are dealing with a digital world and this new platform can be an opportunity for our young generation, our country, the region and the world," he said.

Expressing content about his administration’s achievements in ICT and start-ups sectors, Rouhani said that “an Iranian start-up have been able to create 1.6 million jobs in four years, which is a great honor”.

ELECOMP 2019 is underway at Tehran International Permanent Fairground on 18-21 July.

"Conducting practices and maneuvers to promote the preparedness of the country to deal with the threats is a priority for Civial Defense Organization this year," General Jalali said.

He reiterated that preparedness in the face of incidents is something that has always been emphasized by Supreme Leader of the Islamic Revolution Ayatollah Seyed Ali Khamenei.

General Jalali further added that his organization conducted as many as 60 maneuvers in banking, transportation and other fields last year since the threats in cyberspace has increased.