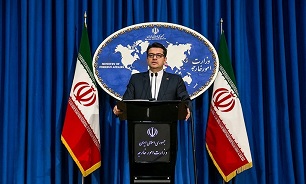 “The Adrian Darya oil tanker finally docked on the Mediterranean coast and unloaded its cargo despite acts of sabotage by the US,” Mousavi said in remarks released on Sunday night.

“We had already announced that we would sell our oil in any way and that acts of sabotage would not affect our plans,” he added.

The spokesman further emphasized that the US measures against the supertanker are contrary to international regulations, including the law of the sea and regulations of the International Maritime Organization (IMO).

The US recently blacklisted the Iranian oil tanker Adrian Darya 1, formerly known as Grace 1, and sanctioned its captain, according to the US Treasury Department.

A report by The Financial Times revealed Wednesday that four days before the US imposed sanctions on the tanker, the vessel’s Indian captain received an unusual email from US Special Representative on Iran Brian Hook.

According to several emails seen by the Financial Times, Hook wrote to Akhilesh Kumar on August 26 that the Trump administration was offering him several million dollars to pilot the ship to a country that would impound the vessel on behalf of the US. To make sure the captain did not mistake the email for a scam, it included an official state department phone number.