TEHRAN (defapress) – Head of the Atomic Energy Organization of Iran (AEOI) Ali Akbar Salehi paid a visit to Natanz nuclear facilities in Isfahan on Monday, a few days before Iran’s deadline for its fourth JCPOA step runs out.
News ID: 79202 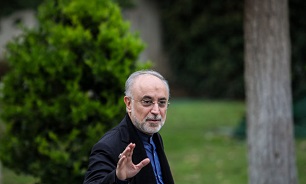 The nuclear chief visited the Natanz nuclear facilities to oversee the execution of measures the country undertook as part of its steps to reduce commitments to the nuclear deal, officially known as the JCPOA.

The visit took place a few days before Iran’s 60-day deadline for its fourth JCPOA step runs out.

Salehi is scheduled for a press conference today to answer questions posed by reporters who have accompanied him during the visit.

One year after the US withdrawal from the 2015 nuclear deal, Iran announced in May 2019 that it is reducing commitments to JCPOA in a transparent manner and according to Paragraphs 26 and 36 of the Joint Comprehensive Plan of Action (JCPOA). Tehran has so far taken three steps, highlighting that all its measures are reversible as soon as other parties can shield its economy from damages of US unilateral sanctions.

President Rouhani will announce the details of the fourth step on November 7.

The European signatories to the JCPOA have so far failed to uphold their commitments. They have expressed vocal support for the deal but failed to provide meaningful economic incentives as required under the nuclear agreement.