US Surprised with Iran’s N. Capacity

TEHRAN (defapress)- Head of the Atomic Energy Organization of Iran (AEOI) Ali Akbar Salehi said his country’s quick snapback to pre-nuclear deal conditions of atomic activities was a shock for Washington, adding that the US did not believe that Tehran had such a high capacity.
News ID: 79240 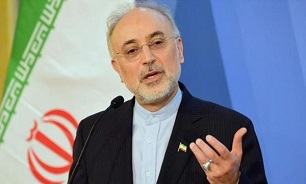 Noting that the European and American politicians have reacted to Tehran’s latest move and are concerned, Salehi stressed on Saturday that Iran’s potentials have become active now.

Meanwhile, the atomic chief of Iran stressed that the country’s nuclear measures are all taken within the framework of the 2015 nuclear deal, officially known as the Joint Comprehensive Plan of Action (JCPOA).

The Atomic Energy Organization of Iran announced on Wednesday (November 6) it had officially started injecting gas into 1,044 centrifuges at the underground Fordow nuclear plant in the fourth step away from the 2015 nuclear deal. The JCPOA allowed the first-generation IR-1 centrifuges at Fordow to spin without uranium gas.

Salehi underlined the realization of the Islamic Republic's will in a short time, saying that, "It was a very big challenge for us at the AEOI to increase the country’s nuclear enrichment capacity to 3,500 SWU. This is very big in a short time."

He stressed that 15 new-generation nuclear centrifuges have been used at Natanz nuclear facility to increase the nuclear enrichment capacity to 2,660 SWU.

“Europeans and Americans are at awe because they thought the Iran doesn’t have the capacity,” the AEOI chief mentioned.

“The Islamic Republic has not done anything outside this deal. According to paragraph 26 of the deal, these points were taken into consideration that we can take some actions in a bid to create balance,” Salehi added while speaking to reporters in the Southern city of Bushehr.

"Based on paragraph 26, if the other parties to the deal do not fulfill their obligations, we can scale back our commitments accordingly in a bid to create a balance in the deal,” he added.

According to the Iranian atomic chief, the UN nuclear inspectors will verify Iran’s uranium enrichment and its degree on Sunday.

Since the US and Europeans did not remove sanctions, Iran doesn’t have any nuclear limits anymore, he added.

“We did not start reducing our nuclear commitments, they weren’t committed to their promises and Iran couldn’t witness that such actions take place unilaterally,” the Iranian official mentioned.

Salehi emphasized that the balance has been created now, noting Iran is not willing to reduce more commitments but it depends on how the Europeans and Americans will respond to this measure.

Tehran says the suspension of its commitments is not a violation of the JCPOA but is based on Articles 26 and 36 of the agreement itself.

The fate of the Iran deal has been in doubt since May 2018, when the US abruptly abandoned the deal and reinstated the anti-Iran sanctions that it had lifted as part of the JCPOA.

Iran says the European cosignatories — Britain, Germany, and France — have so far failed to uphold their commitments. They have expressed vocal support for the deal but failed to provide meaningful economic incentives as required under the nuclear agreement.

Early on Thursday, Iran resumed injection of UF6 gas into the centrifuge machines installed at Fordow nuclear facility as part of the country's fourth step to modify nuclear deal undertakings.

The measure at Fordow was taken upon an executive order by President Hassan Rouhani in coordination with the Supreme National Security Council (SNSC).

A cylinder including 2,000 kg of uranium hexafluoride (UF6) was transferred from Natanz to Fordow nuclear site. Then, the cylinder was connected to the feeding lines at Wednesday midnight.

Following the successful technical overhaul, the gas injection to the chains as well as the centrifuges and producing and gathering enriched uranium began at Fordow under the supervision of the International Atomic Energy Agency (IAEA).

Late on Friday, Iranian Foreign Minister Mohammad Javad Zarif reassured that his country will continue its diplomatic engagement with countries interested in preserving the nuclear deal, underlining that the 4th step of Tehran’s reduction in nuclear commitments was a natural response to the US destructive moves and Europeans’ inaction.

On Thursday, Iran’s Ambassador to the UK Hamid Baeidinejad dismissed the Europeans’ argument of their inability to honor their nuclear deal commitments under US pressures, adding that the terms of the agreement and the ability to deliver on obligations should have been thought of before making a promise.

“We hope this warning would encourage all other parties to implement their commitments. … Now it depends on the other side — if they don’t take this warning seriously … we will be in a very difficult situation,” he warned.