TEHRAN (defapress) – Foreign Ministry Spokesman Abbas Mousavi said Mon. that the European signatories to the 2015 nuclear deal (JCPOA) intended to activate the trigger mechanism but have decided against it for now after hearing Iran’s reasonings.
News ID: 80100 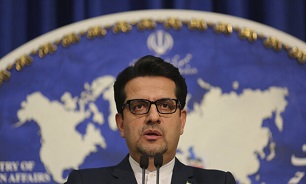 In his weekly press conference on Monday, spokesman for the Iranian Foreign Ministry Abbas Mousavi said the newly-appointed EU foreign policy chief Josep Borrell, who has made his first visit to Iran, will meet and hold talks with Foreign Minister Zarif, President Rouhani and Parliament Speaker Larijani today on the Iran nuclear deal and a range of international issues.

Asked to comment about Borrell’s visit takeing place against the backdrop of Europe’s move to trigger the JCPOA’s 'dispute resolution mechanism,' Mousavi said “Europe has not activated the trigger mechanism yet. They wanted to, but didn’t after they heard Iran’s reasoning and arguments. Mr. Zarif wrote a 14-page letter to Mr. Borrell in which all of these reasons were explained.”

He stressed that Zarif’s talks with Borrell will be “frank” and to the point.

“The visit of the EU foreign policy chief is important, and we hope that they have listened to our reasons and will cooperate with us,” he added.

European members for some two months have been talking about the possibility of triggering the JCPOA’s 'dispute resolution mechanism,' which is also known as the trigger mechanism, and whose activation can lead to the return of the UN sanctions on Iran.

The threat came after Iran took a series of steps in reducing its commitments under the deal in response to the US withdrawal from the agreement and its re-imposition of sanctions, and the Europeans’ failure to keep their end of the bargain in protecting Iran’s economic benefits against the US sanctions.

In a recent interview with German weekly news magazine, Der Spiegel, Zarif censured the European countries for having failed to meet their commitments under the JCPOA, saying "It’s a disaster for Europe to be so subservient to the US. Anybody who accepts unilateralism is helping it."