TEHRAN (defapress) – Iran’s ambassador to the United Nations said the US government’s unilateral policies and addiction to inhumane sanctions against other nations have undermined the credibility of the UN and the rule of law.
News ID: 81055 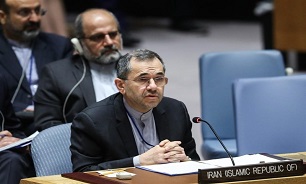 The US has endangered multilateralism across the world through its contemptuous treatment of international organizations and the international law, Majid Takht Ravanchi said in an address to a virtual meeting of the UN Security Council, held on Friday to mark the 75th anniversary of the end of World War II in Europe.

Reminding the “poignant lessons” that were taught by World War II, Takht Ravanchi cited the US’s actions as clear modern-day instances of “systematic contempt” for the international law.

“Such policies have posed a challenge to multilateralism and jeopardized countries’ collective interests,” he said.

The Iranian ambassador said the UN was established as a center to be used by countries to coordinate their attempts to resolve international problems, but the US and some countries have undermined the world body’s credibility through their contempt and contravention of the international law, and resorting to inhumane measures such as sanctions, to which their foreign policy has become addicted.

He also called for the reinforcement of the rule of law across the world as well as international cooperation and interaction as means of doing away with the challenges that multilateralism has been faced with.