TEHRAN (defapress) – Iran and Syria signed a comprehensive agreement to enhance their cooperation in the military and defense sectors.
News ID: 81486 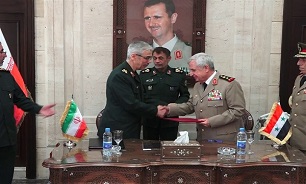 The deal was signed on Wednesday during a ceremony in Damascus attended by Chairman of the Chiefs of Staff of the Iranian Armed Forces Major General Mohammad Baqeri and Syrian Defense Minister Ali Abdullah Ayoub.

Speaking after signing the agreement at the headquarters of the General Command of the Syrian Army and Armed Forces, Major General Baqeri said the deal “increases our will to work together in the face of US pressure.”

He added, “The people and countries of the region do not welcome the presence of the United States, and our response to the American prattling will continue.

“We will strengthen Syria’s air defense systems within the framework of strengthening military cooperation between the two countries.”

On the Turkish military presence on Syrian soil, the Iranian top commander said that Turkey is dragging its feet regarding the implementation of its commitments under the Astana agreements on the withdrawal of terrorist groups from Syria.

He said Turkey must realize that the solution to its security problems is through negotiation with the Syrian side, and not through military deployment in the Arab country.

Ayoub, for his part, said, “If the American administrations had been able to subjugate Syria, Iran and the axis of resistance, they would not have hesitated for a moment.”

He described Israel as a partner of the US in the war against Syria, adding that terrorist groups constituted part of the Israeli aggression.

He also lambasted the so-called Caesar sanctions imposed by the US against his country, saying Syria will counter the bans barring the provision of foodstuff and medicine to its people.

He stressed that Syria has maintained its government structure since 2011 and will undoubtedly emerge victorious out of the war.

The two sides also underlined the need for the withdrawal of foreign forces who have been illegally deployed to the Arab country in violation of international law and said the forces are the main obstacle to the complete cleansing of armed terrorist groups in some parts of Syria.

They also issued a joint statement which said a continued battle against Takfiri terrorism supported by some regional and international powers is among the goals of the agreement.

Iran began providing Syria with advisory military assistance after numerous countries, at the head of them the US and its Western and regional allies started funding and arming militants and terrorists with the aim of deposing Syrian President Bashar al-Assad’s government.

Despite initially losing considerable expanses of territory to Daesh and other terror outfits, the country, however, rallied with the help of Iran and Russia, another Damascus’ ally, and reversed the balance in favor of itself on the battleground.