TEHRAN (defapress) – Stating that the northwestern borders of Iran have not changed, Foreign Ministry Spokesman said that neither the border has been changed nor Iran is accepting any change outside the announced contents in the region.
News ID: 82550 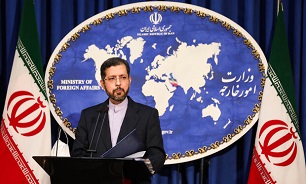 Speaking in his weekly press briefing on Monday, Saeed Khatibzadeh said, "Last week we faced a series of baseless media claims that there will be a change in the map of the region after the Nagorno-Karabakh crisis. Some fake maps were published in this regard that were media mischief."

"The Islamic Republic of Iran has welcomed any permanent solution to the crisis and has sought to resolve it peacefully over the past three decades. Any action that contributes to this process will be welcomed by Iran," he added.

Referring to Iran's role in resolving the Nagorno-Karabakh conflict and sending Turkish peacekeepers to the region, he said, "The Islamic Republic of Iran has played and will continue to play a strategic role in all equations in the region. The only permanent solution to this crisis is to consider the sovereignty of countries and respect for borders, and we welcome anything that helps in this direction."

Stating that Iran carefully and vigilantly monitors all cases in the field of security, saying, "There are numerous reports about the presence of Takfiris, and we constantly hear from sources that these reports are not accurate. We hope that there will be no more Takfiri and terrorist groups in the region."

Elsewhere in his remark, he answered a question about the selling of weapons to Afghanistan given the lifting of arms embargo, saying, "Iran is a responsible government and does not seek arms sales, but seeks defense cooperation. However, given the lifting of arms embargoes, Iran has the right to fulfill the legitimate needs of other countries within the framework of a responsible government."

"We do not have any restrictions within the framework of international rules and regulations to meet the defense needs of other countries, and we can use this right," he added.