TEHRAN (defapress) – The Foreign Ministers of Saudi Arabia, the UAE, the UK and the US, in a joint declaration on Wednesday, accused Iran of meddling in Yemen’s affairs and blocking the peace process while giving a pass on Saudis’ aggression in Yemen.
News ID: 75599 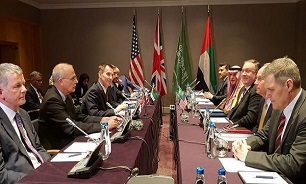 The four ministers met yesterday in an anti-Iran summit in Warsaw, which was held under the pretext of discussing peace in the Middle East but had a special focus on Iran.

The representatives of Saudi Arabia, the UK, the US and the UAE once again claimed that they were committed to a comprehensive political solution to the conflict in Yemen and their endorsement of the agreements reached in Sweden by the Yemeni parties in December 2018.

The ministers, in a joint declaration, accused Iran of having a destabilizing effect on Yemen, through provision of finance, ballistic missiles and advanced weaponry to the Houthis, and in the wider region.

Iran has strongly dismissed the claims on providing weapons to Houthis.

Iranian Foreign Minister Mohammad Javad Zarif was quoted as saying in December, “Iran has not provided weapons to the Houthis (Ansarullah's movement) in Yemen, but the Houthis are using the weapons that they received from Saudi Arabia during the term of Ali Abdullah Saleh."

The four ministers, in their joint declaration, also accused Iran of violating UNSCR 2216 and UNSCR 2231 resolutions, for its ballistic programs, which has strongly been denied by the Islamic Republic.

They also expressed full support for Saudi Arabia and its so-called “legitimate national security concerns” and called for an immediate end to the Houthi’s attacks on Saudi Arabia. But they gave a pass on the Saudis' aggression in the war-torn country.

Along with their anti-Iran efforts, they also discussed steps to push forward the US’ wish to cut the exports of Iranian oil.