TEHRAN (defapress) – Iranian Intelligence Minister Seyed Mahmoud Alavi and a high-ranking Hamas delegation have conferred on bilateral ties as well as US plots in the region.
News ID: 77787 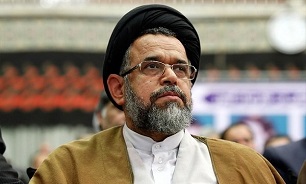 According to the Intelligence Ministry, Hamas deputy leader Salah al-Aruri, a member of Hamas Political Bureau Hessam Badran, Hamas’s foreign relations chief Osama Hamdan, and its Lebanon representative Ahmed Abdul Hadi were present in the meeting with the Iranian minister. The report doesn’t specify the date or place of this meeting.

The two sides discussed ways to counter US-Israeli threats in the region, especially those against Palestine.

They also conferred on bilateral relations and agreed to continue such meetings to counter the dangers arising from US-proposed ‘Deal of the Century’.

Both sides highlighted that the deal is in favor of Zionists and aggressors in the region and that no Palestinian or regional country would accept it.

Pointing to US President Trump’s decisions to relocate embassy to al-Quds and support Zionists’ settlements in the West Bank and Golan, the two sides also noted that 'Deal of the Century', a plan proposed by the US and Zionist regime and supported by Saudi Arabia, is a preface to normalization of Arab-Israeli relations. In this plan and future negotiations, the issue of refugees will be solved with an ‘alternative land’ outside Palestine and the right of Palestinian refugees to return to their country will be abolished forever, the two sides stressed.