Iran urges regional countries not to be deceived by US

TEHRAN (defapress) – An official with Iranian Foreign Ministry pointed to Brian Hook's visit to regional countries and US efforts to extend arms embargo on Iran, urging these starts and the international community not to be deceived by the US.
News ID: 81665 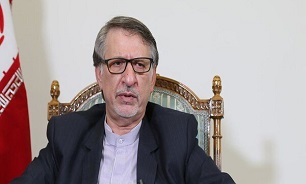 Addressing countries in the region and world about the recent visit of Brian Hook to regional countries in line with extension of Iran arms embargo, Deputy Foreign Minister for International and Legal Affairs Mohsen Baharvand said "Our message to the countries of the region and the world is that do not to be deceived by the United States."

Stating that the United States has deliberately propagated and behaved in recent months in a way to change the opinions of other countries about Iran, he added, "The Americans are well aware that Iran is a rational player and has never been a security threat to the countries in the region."

Baharvand said that the main goal of the Americans was to destroy JCPOA and create new unrest in the region, adding, "The result of this irrational behavior of the United States is that all the countries in the region will be a loser."

His remarks came as the US representative for Iran affairs Brian Hook has visited some regional countries in recent days as part of the US efforts to extend the arms embargo on Iran, and is scheduled to travel to several European countries as well.

Repeating allegations against Tehran, Hook said that Washington will continue efforts to extend the UN arms embargo on Iran which is due to expire in October. "The White House has a plan and tries to attract the votes of permanent and non-permanent members of the UN Security Council. "

The Trump administration has started efforts to extend arms embargo on Iran which will end this October. Washington has announced that it will use all its tools in the United Nations Security Council to achieve its aim. However, such a resolution is believed to be vetoed by Russia and China. As a second approach, Washington will then try to argue that it is a JCPOA participant so as to trigger the snapback mechanism which will return UN sanctions against Iran. This is while US President Donald Trump ceased his country's participation in the JCPOA in May 2018 and re-imposed unilateral sanctions on Iran.

Tehran has strongly condemned US efforts, noting that US is no longer a participant to the JCPOA since its illegal withdrawal from the deal and hence, cannot start the mechanism.

Meanwhile, Tehran, Beijing, and Moscow highlight that the arms embargo should be lifted as mentioned in the JCPOA.