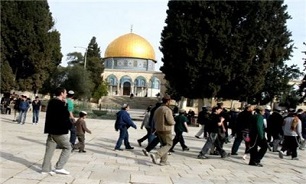 In comments on Tuesday, Hamil Alyan, a political leader of the Islamic Jihad Movement, called on all Muslim nations to attend the Quds Day rallies and safeguard the history and identity of Quds.

Describing the city of al-Quds as the “heart of Palestine and Islam”, the official underlined that the Islamic Jihad will be defending the city with whatever options available.

The strong presence of Palestinians in al-Quds and Al-Aqsa Mosque are meant for defense, Al-Ahed new quoted him as saying.

Denouncing the US and Israel as the epitome of evil in the world, Alyan stressed that none of US President Donald Trump’s decisions about al-Quds will come true.

The weakness of certain Arab leaders who insist on normalization of ties with the Israeli enemy could by no means undermine the Islamic Jihad’s resolve, he stated.

The official also described “resistance and battle” as the sole way for reclaiming al-Quds, emphasizing that defeat of the Zionist plots hinges on the liberation of Al-Aqsa Mosque.

The day is seen as the legacy of the late founder of the Islamic Republic of Iran, Imam Khomeini, who officially declared the last Friday of Ramadan as International Quds Day back in 1979.

This year’s rallies will be held under the slogan “En Route for Quds” in the Arab countries.