TEHRAN (defapress) – Iranian Minister of Defense said that the Armed Forces of the Islamic Republic of Iran is the main element of power-creating, development and progress of the country.
News ID: 82228 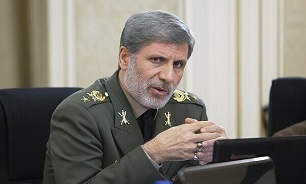 Speaking in his meeting with senior commanders of Army, IRGC and Law Enforcement Forces (Police) in Khorasan Razavi province on Wed., Brigadier General Amir Hatami said, “Today, Islamic Republic of Iran owes its security to martyrs and self-sacrifice of war veterans who did not allow any part of Iran to be invaded by aggressors and defended their land and territory with their unparalleled courage and bravery.”

During the First and Second World Wars, the Islamic Republic of Iran was invaded in spite of its neutrality and many famines and hardships hit its people, he said, adding, “The reason for Iran's withdrawal at that time was the existence of reckless and irrational rulers who declared their neutrality out of desperation and lack of power.”

Elsewhere in his remarks, the defense minister pointed to the strategic situation of the Islamic Republic of Iran in the region and added, “Iran's location in the West Asian region and its geographical conditions are such that due to its oil, gas, energy, waterways and productive resources, it will always be coveted by the enemies and this shows that we must always focus on increasing our defense power and national authority.”

Despite unjust and cruel sanctions imposed against the Islamic Republic of Iran, the country enjoys sustainable and lasting security, Hatami emphasized.

Close relationship and interaction of the Armed Forces came to being during the eight years of Sacred Defense (Iraqi imposed war against Iran in 1980-1988) in particular and today, after 40 years, this extensive cooperation and interaction have turned the Armed Forces of the country into a single and steely power in the international arena, Defense Minister Hatami underlined.