Iran Has Many Options for Countering US Measures

TEHRAN (defapress) – A top Iranian lawmaker said the country has a wide range of options to respond to Washington’s hostile actions, stressing that Tehran’s vow to react to violations of the Joint Comprehensive Plan of Action (JCPOA) is not just a slogan.
News ID: 65667 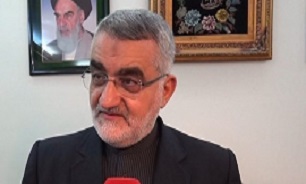 Speaking to the defapress News Agency, Chairman of the Parliament's National Security and Foreign Policy Commission Alaeddin Boroujerdi said Iran has "multiple options for responding to US anti-Iran measures.”

Iran’s choices are not limited when it comes to reaction to US breaches of the JCPOA, the nuclear agreement between Iran and the Group 5+1 (Russia, China, the US, Britain, France and Germany), he added.

One of the main measures Iran will be taking in reaction to any violation of the nuclear deal is disclosure of the "US unprincipled conducts” in the international arena, the lawmaker added.

Earlier this month, President Hassan Rouhani said if the US government decides to repeat the failed experience of imposing sanctions on Iran, Tehran can immediately acquire capabilities in its nuclear industry that would be much more advanced than those prior to the JCPOA negotiations.

Describing the nuclear deal as a symbol of peace and diplomacy’s victory over war and unilateralism, President Rouhani also underscored that the JCPOA is not and will not be "the only option” for Iran.