US No Longer 'Automatically' Plays Role of Europe's Defender

TEHRAN (defapress)- Speaking before the lower house of parliament in Berlin, German Chancellor Angela Merkel stated on Wednesday that the US will no longer defend Europe automatically and that the latter should make more efforts to defend itself.
News ID: 78662 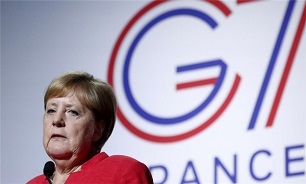 "Europe is tied to the US, which is a superpower both in the economic and military aspect, by common values despite any differences in opinions. There are a lot of things in common, but the US won't defend Europe automatically as it did during the Cold War,” Merkel noted, Sputnik reported.

Merkel also said the current trade war between the two superpowers, China and the US, is hitting Germany.

“We have international uncertainty due to the US-China trade conflict and that is, of course, having an impact on an export nation like Germany”, Merkel told the Bundestag, the lower house of parliament.

The German chancellor has also touched upon the uncertainty around Brexit that is hitting the German economy.

According to Merkel, there is still a chance for Britain's divorce from the European Union to take place with a deal although Berlin is ready for a no-deal withdrawal.

"We still have every chance of getting an orderly (Brexit) and the German government will do everything it can to make that possible - right up to the last day. But I also say we are prepared for a disorderly Brexit,” Merkel added.

"But the fact remains that after the withdrawal of Britain, we have an economic competitor at our door, even if we want to keep close economic, foreign and security cooperation and friendly relations”, Merkel noted.

The speech comes a month after Federal Statistics Office data showed that growth in Germany’s gross domestic product had fallen by 0.1 percent quarter-on-quarter to 0.4 percent, down from 0.9 percent in the first quarter of 2019 as a result of the trade war and the looming threat of a no-deal Brexit.

Washington and Beijing have been engaged in a trade conflict for over a year since President Donald Trump announced tariffs on $50 billion worth of Chinese imports, justifying the move by the need to balance the trade deficit. The two countries have subsequently introduced several rounds of reciprocal tariffs.

In the latest developments, China decided to impose a new batch of 10 and 5 percent tariffs on 75 billion dollars’ worth of US imports starting September 1 and December 15 respectively. Following China's announcement, Trump said that the US would respond to China by imposing even higher tariffs.