TEHRAN (defapress)- Iranian Energy Minister Reza Ardakanian stated here on Saturday that electricity grids of Iran and Syria will be connected to each other through Iraq's network in the near future.
News ID: 79173 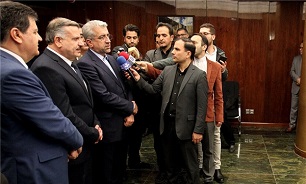 Ardakanian made the remarks at a press conference on the sidelines of the signing ceremony of the agreement between Tehran and Damascus.

“Electricity connection between Iran's network and other regional countries will also be followed up in a definite time,” Ardakanian said.

He also underlined the importance of promoting regional cooperation by focusing on both export and import of electricity and the exchange of knowledge.

The Syrian minister, for his part, announced that the joint committees will be formed to pursue the implementation of agreements between the two countries.

In a relevant development on Friday, Armenian Minister of Territorial Administration and Infrastructure Suren Papikyan voiced his country’s readiness to broaden cooperation with Iran, specially in the field of energy and electricity.

He noted that during his recent visit to the 19th Iranian International Electricity Exhibition in Tehran, he has maintained good ties with Iranian companies in the electricity field.

Papkiyan said that Armenia as importer of electricity, has always been after finding new ways for boosting cooperation and energy sources.

He, meantime, pointed to synchronization of Iran-Iraq electricity network, and said that Armenia has also suitable economic relations with Iraq and the process is still developing.

Papkiyan said that like Armenia which is a bridge for connecting Iran to Georgia and Eurasian Economic Union states, Iran is also regarded as a bridge for more relations between Armenia, Iraq and other regional countries.